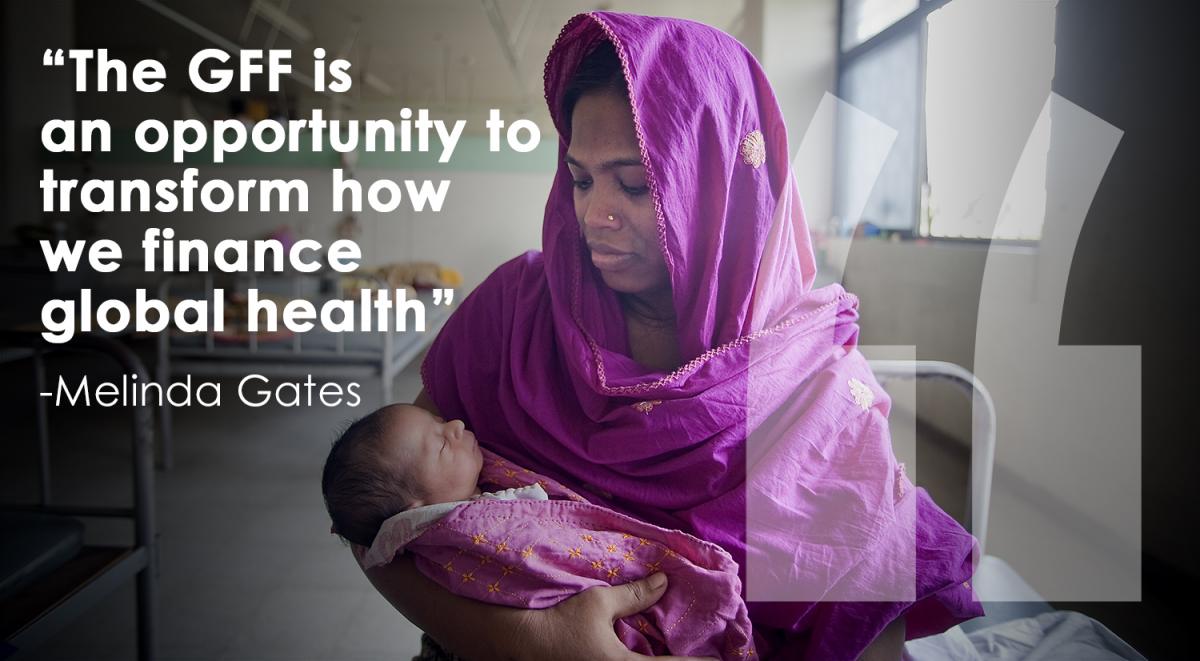 Over 5 million women and children are still dying from preventable conditions in 50 countries every year, despite significant progress. A new approach is needed.

With the GFF’s innovative financing model, countries have the unique opportunity to transform how they prioritize and finance the health and nutrition of their people, especially women, children and adolescents. And they can do so in a way that is self-sustaining, that helps their economies grow, and that enables them to keep investing in their people.

After our creation in 2015, we are already halfway to supporting the 50 countries with the greatest need.

Co-hosted by the Governments of Norway and Burkina Faso, the World Bank Group, and the Bill & Melinda Gates Foundation, our replenishment conference in November aims to raise additional funding so we can expand support to all 50 countries.

Working in partnership, we can save up to 35 million lives by 2030, and greatly improve the lives of millions of women, children and adolescents, and empower countries to build sustainable futures.

Sixteen countries are already benefiting from the approach and we are working with a further eleven countries on the prioritization and financing of the health of women, children and adolescents. These partnerships are made possible by generous initial contributions to the GFF Trust Fund from governments of Canada, Denmark, Japan, Norway, UK, the Bill & Melinda Gates Foundation, and MSD for Mothers.

Ten reasons to invest in the GFF

Investing in people is a critical step for boosting economic growth and ending extreme poverty. Established in 2015, the GFF is designed as an innovative financing mechanism to close the significant financing gap needed to eliminate preventable maternal and child deaths worldwide. The GFF process helps governments and their partners to prioritize, focus on results, and tackle the main system bottlenecks to achieve impact at scale, which in turn is critical to achieving universal health coverage.

A new model for scaled and sustainable financing is at the heart of what makes the GFF Trust Fund a pathfinder for the SDG era of financing for development, catalyzing the following sources of funding:

REASON #3: THE GFF IS POWERED BY COUNTRY-DRIVEN PARTNERSHIPS

Partnership is the GFF model, with the GFF ensuring that there is financing behind common global health priorities and mandates. Instead of building new, parallel structures, the GFF invests in existing institutions and helps countries to bring together key multilateral stakeholders—including the United Nations, WHO, Gavi, the Vaccine Alliance, and the Global Fund to Fight AIDS, Tuberculosis and Malaria (Global Fund)—as well as bilateral, private-sector, and civil society organizations at the national level and the GFF Investors Group at the global level. By bringing all key stakeholders together to support the development and implementation of a single country-led investment case, the GFF enables both countries and stakeholders to identify their comparative advantages, avoiding duplication and reducing gaps. The GFF Trust Fund supports countries in mapping resources and aligning funders around the investment case and in identifying the key health financing reforms they need to make to mobilize their domestic resources, and it collaborates in expenditure tracking as well. GFF-supported countries have their own South-to-South learning network, sharing successes and failures in real time and learning from each other. In countries like the Democratic Republic of Congo, Cameroon, and Guatemala, the GFF is working with Gavi and the Global Fund to deliver results for countries.

The GFF focuses on the critical stages of the life cycle: pregnancy, birth, the early years, and adolescence. In the ongoing effort to identify high-impact RMNCAH-N interventions and critical system bottlenecks to achieving impact at scale, the comparative advantage of the GFF approach is that its investment case goes beyond specific interventions and disease-specific approaches, helping countries to build more resilient primary health care services and systems.

The GFF shifts the focus from inputs to health and nutrition outcomes, taking into account multisector drivers, including health, education, water sanitation and hygiene (WASH), gender, nutrition, and social protection. For example:

REASON #6: THE GFF HAS A STRONG EQUITY FOCUS

Countries prioritize funding for those populations most left behind, often people living in geographically remote or fragile areas that risk spiraling into instability. Because of this focus, the GFF steers financing and implementation support to fragile areas—focusing on the front lines first.

The GFF helps to move resources to the front lines, to the communities where they are needed most. For example, in the northeastern states of Nigeria, the GFF supports the reestablishment of health services with a focus on quality maternal, newborn, and child health and nutrition services, psychosocial support, and mental health. By “purchasing for performance,” local government areas in this fragile part of Nigeria are making rapid progress, increasing skilled deliveries from an estimated 5% coverage to 40%.

After its first two years, the GFF is showing tangible results in its front-runner countries. For example:

The GFF links disbursements to results and shifts the focus away from inputs to outcomes, at different levels of the health care system. This is accompanied by a strengthening of governance and accountability, building capacity to manage public financing, and increasing transparency of results monitoring. Mozambique, for example, drives health system and finance reforms by linking disbursements to (among others) coverage of community health workers trained and active; institutional deliveries in priority districts; secondary schools offering sexual health and reproductive services; family planning; children receiving nutrition interventions in provinces with the highest chronic malnutrition; health expenditures made in underserved areas; domestic health expenditures/total government expenditures; and deaths certified in health facilities with data on cause coded.

REASON #10: THE GFF IS A HIGHLY EFFICIENT AND LEAN MECHANISM

The small GFF Secretariat (about two dozen staff) draws on the full capacity of the World Bank Group and benefits from the technical contributions of the GFF partnership. Projects supported by the GFF Trust Fund, which are jointly financed by the IDA and IBRD, enjoy significantly reduced transaction costs due to the fact that they are task-managed by World Bank Group staff, supported by GFF country focal persons and technical staff, and follow the Bank’s governance and fiduciary standards and systems. 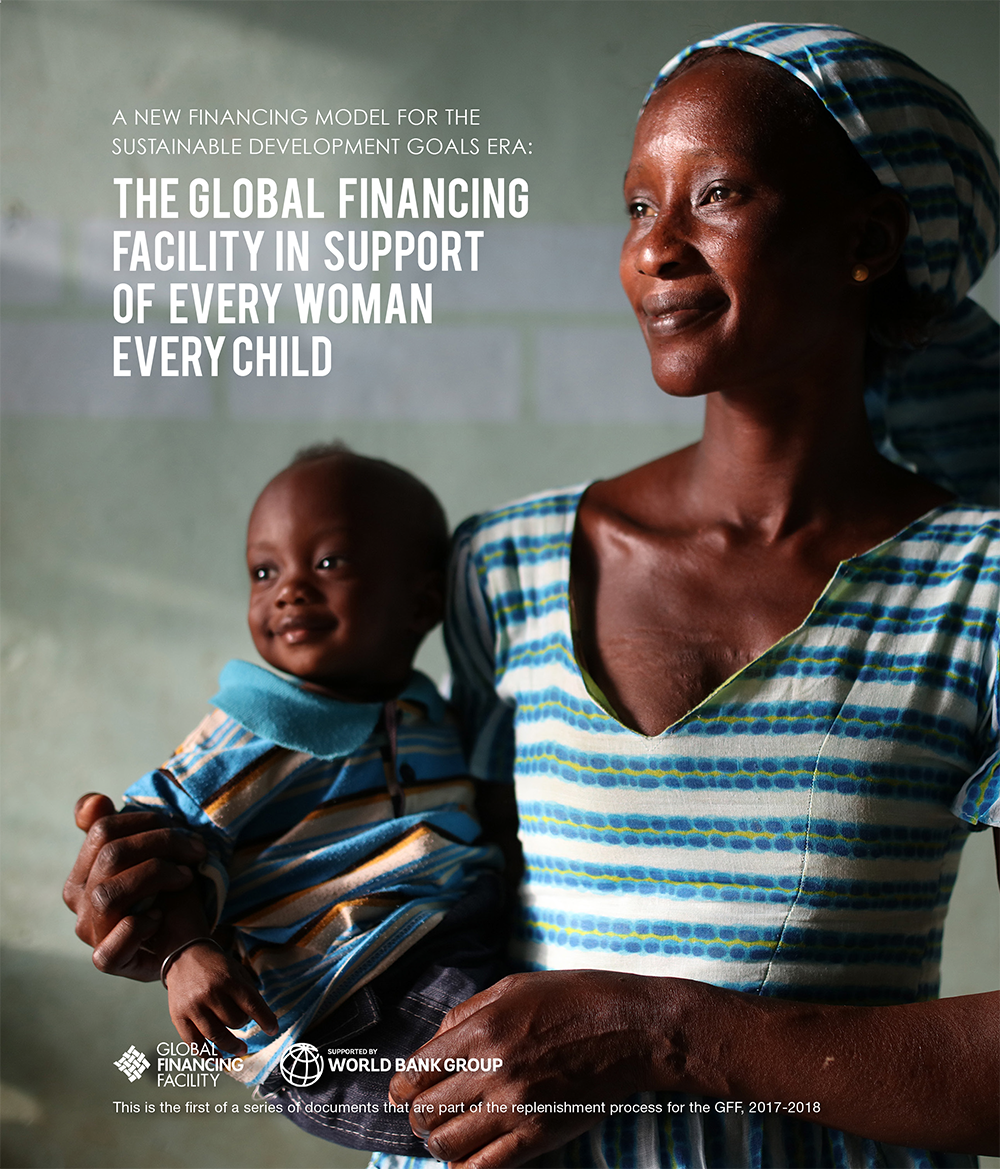 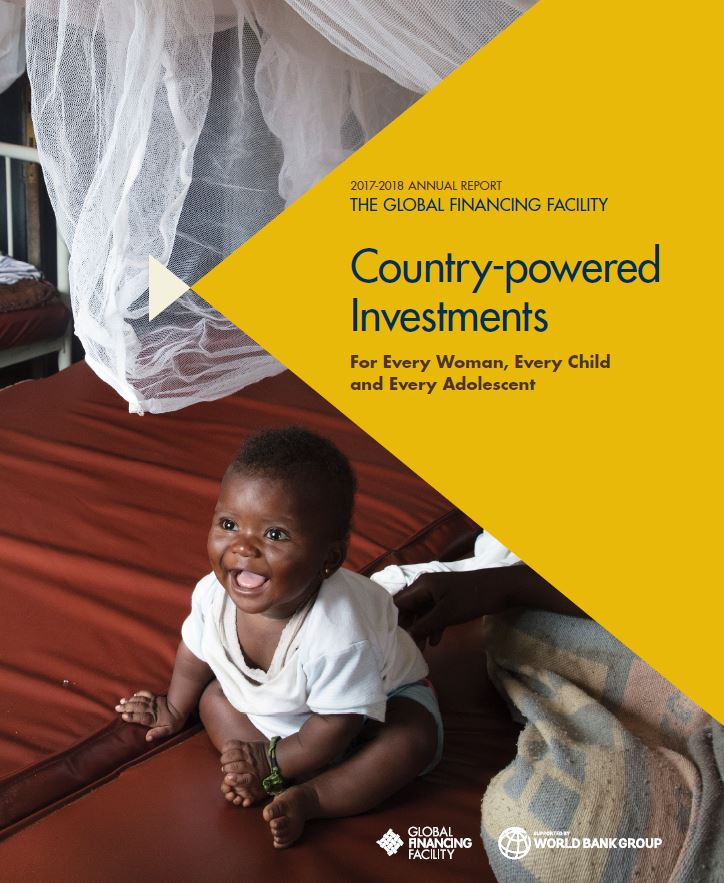 PRESS RELEASE: Global Financing Facility in Support of Every Woman Every Child Launches Replenishment to Save Lives of up to 38 Million Women, Children and Adolescents by 2030

A GUIDE FOR GFF ENGAGEMENT AND INCREASING FINANCING RESOURCES

How the GFF Trust Fund Complements and Adds Value to IDA | PDF | 0.2MB

LANCET: The Global Financing Facility – towards a new way of financing for development

DEVEX: Opinion: Making the case for the Global Financing Facility

DEVEX: Opinion: With the Global Financing Facility, Mozambique is taking a fresh approach to health