Chief of Staff, Ministry of Health

Building on progress in several key health areas, the government of Ethiopia developed a transformational plan for its health sector to further accelerate gains, with support from the Global Financing Facility (GFF) and other partners. The plan serves as Ethiopia’s investment case for women’s, children’s and adolescent health to help prioritize and guide where investments are needed to expand quality health services, particularly in regions with the lowest progress and the greatest financial needs. The GFF helped to facilitate significant reforms that narrowed health financing gaps and strengthened data systems for monitoring progress. In addition, the GFF helped to drive dialogue with the private sector to mobilize more investments in health. These efforts have contributed to better health outcomes, including service delivery, more attended births, increased use of contraception and improved participation of children under two in growth monitoring programs.

Steady economic growth, combined with strong government stewardship, has enabled Ethiopia to achieve better health outcomes for women and children. Between 2000-2016, under-5 and infant mortality rates declined by 42 percent and 28 percent respectively. During the same time period, women’s fertility rate dropped from 5.5 to 4.6 children. However, Ethiopia is still lagging in several areas such as family planning, adolescent health and stunting. Ethiopia’s per capita spending on health stood at US$32, lower than the average in Sub-Saharan Africa and it is almost equally split among donors, out-of-pocket expenses and government resources. Domestic resources for health as share of total expenditure increased from 7.5 percent to 8.6 percent between 2000 and 2017 but was mainly driven by external resources channeled through the government (on-budget). Progress toward universal health coverage will require financing reforms to increase domestic resource mobilization for health and to align existing donor resources around equitable service delivery.

Ethiopia was the first country to join the GFF and its Health Sector Transformation Plan is designed to help the country reach universal health coverage by prioritizing expansion of equitable and quality health services and strengthening health systems and infrastructure. The plan is being implemented with the support of a US$60 million GFF grant which has mobilized a US$150 million contribution from the International Development Association (IDA), the World Bank’s fund for the poorest countries. It is also backed by the Sustainable Development Goals Performance Fund, a pooled fund with 11 donors managed by the Federal Ministry of Health.

In collaboration with partners and the World Bank, the GFF has played a key role in the plan’s implementation. Specifically, the GFF’s partnership with Ethiopia has helped to:

To help the government increase its own resources and use existing funding more efficiently, the GFF, with support from the World Bank and the Bill and Melinda Gates Foundation, has provided technical assistance and analysis to drive the dialogue on health financing reforms and identify funding gaps and barriers to efficient budget execution. The GFF also supported the nationwide expansion of the existing community-based health insurance, a voluntary health insurance scheme designed to reduce out-of-pocket payments for people in the informal sector.

With this support, the government has managed to implement specific health financing reforms:

The GFF partnership with Ethiopia has played a key role in the country’s steady progress towards universal health coverage. With GFF support, as of February 2020 Ethiopia had accelerated service coverage of maternal and child health services, exceeding targets outlined in the transformation plan.

Health facility data collection, use, and timely reporting jumped from 68 to 84 percent between 2016 and 2018 (SARA 2018). The number of primary health care facilities having access to essential drugs increased from 42 to 48 percent (MoH). 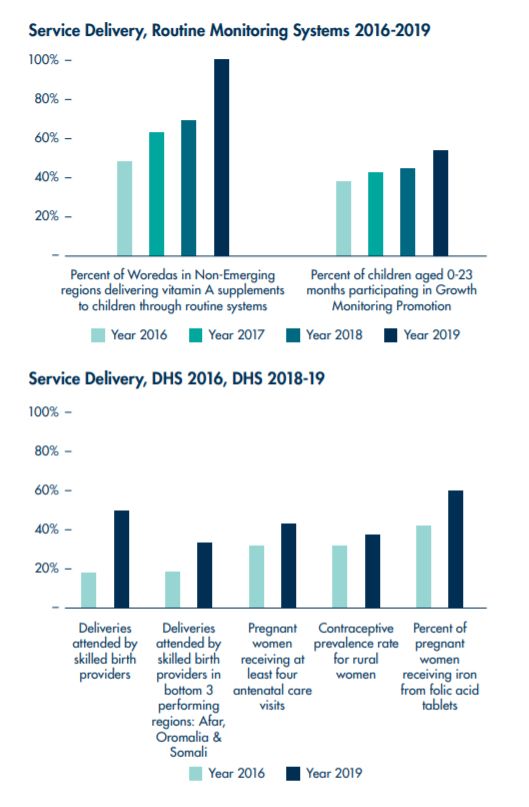